"Equal access to nature for working people from gray cities", was the goal of the founding members of the Naturefriends movement.

Homepage / About us / Our history back

How did it all begin?

In 1895, the first Naturefriends members gathered together to explore and appreciate nature as a source of recreation, to meet together, to educate themselves and to organize activities. The main reason to found Young Naturefriends was the demand for the right of free access to nature for all, as a demonstration against the bourgeois private interests of the big landowners and existing hiking, mountaineering and sports clubs, that denied membership to workers. To date, the Naturefriends movement has grown to over 500,000 members in 21 countries worldwide.

In March, socialist and teacher Georg Schmiedl advertised for three days in the "Arbeiterzeitung", which was a newspaper for the labor class in Germany, to find like-minded people to found a "tourist group". Three people contacted him immediately: Josef Rohrauer, his father Alois and Karl Renner. Then, on Easter Sunday, the first excursion to the Vienna Woods was organized. In September, 185 men and women founded the "tourist union 'Die Naturfreunde'" in Vienna. Karl Renner designed the symbol of the new association. The handshake together with the three Alpine roses stands for the solidarity of the workers' movement.

In July, the first issue of the association's magazine "Der Naturfreund" was published with 400 copies.

In January, the founding meeting members of the Graz local group decided to make "Berg frei" the greeting of the Naturfreunde. The idea was adopted for the entire association. The greeting was held deliberately as a political stance to express the demand for the right to leisure time in the mountains, not only for the nobility and the bourgeoisie but also for the common people.

In August, the first German local group was founded in Munich as the 42nd group in the entire association. Our association rapidly drew attention across Germany by increasing our membership number up to 9000, approximately 15 percent of whom were women at that time.

The first Naturefriends house was inaugurated with the construction of the Padasterjochhaus located in the Stubai Alps in Tyrol.

The Naturefriends movement already had 46,000 members. Three years later, there were 159,000 members in total.

At the first meeting of the German Naturefriends, Naturfreundejugend Deutschlands was founded as an independent but linked youth organization to Naturfreunde with the adoption of the "Guidelines on the Future Development of Youth Work".

The critique on capital and the ruling class led to the banning of the tourist association "Die Naturfreunde" by the Nazis. This ban resulted with the confiscation of the 428 huts and houses, almost 300 of which were located on German territory. 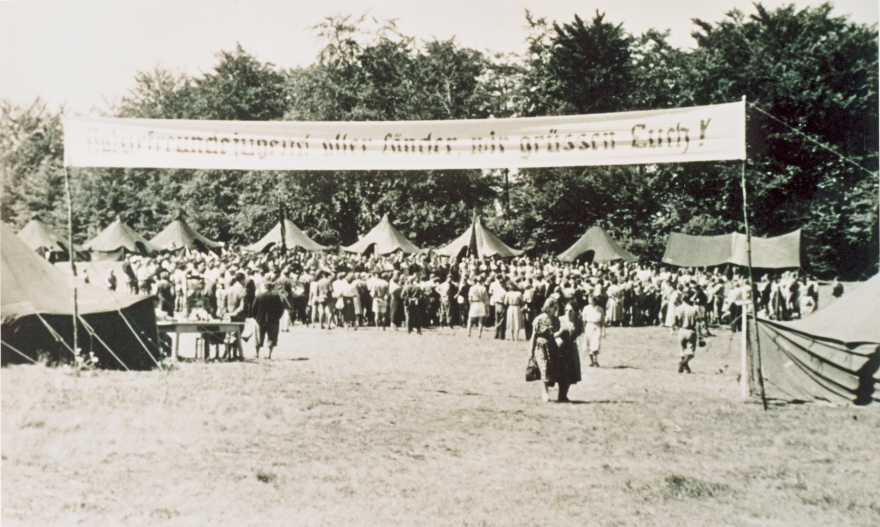 The reconstruction of the association started everywhere. The expropriated houses were handed back to our association. However, the ones in East Germany were used by other organizations.

The association was transformed into Naturefriends International (NFI) with local and national offices across the world. Thus, to date it is made up of independent national associations.

Naturefriends participated in the Easter marches of the opponents of nuclear weapons. The NFI had 270,00 members in 17 countries on all five continents. In Germany, about 100,000 members were counted in more than 650 local groups. The number of association-owned huts, houses, boathouses and townhouses were nearly 400.

Naturefriends demanded an end to the bombing of North Vietnam and condemned the occupation of the CSSR.

In December, the reorganization of the Naturefriends in the GDR began. Today, there are regional associations in all of the new German states.

Naturfreundejugend Deutschlands organized its first children's summit in the World Expo in Hanover. The most prominent guest was German Chancellor Gerhard Schröder.

NaturFreunde Deutschlands celebrated their centenary with a large national meeting in Munich.

Naturfreundejugend celebrated its 90th anniversary with a national meeting under the motto "Diversity instead of simplicity - 90 years young.colorful.active."

The Naturfreundejugend Deutschlands and the Naturfreunde Deutschlands jointly founded the Specialist Unit for the Prevention of Radicalization and Engagement in Nature Conservation (FARN). FARN investigates the historical and current links of German nature conservation and environmental protection with extreme right-wing and ethnic currents and offers nationwide educational and information events on these topics.